A while ago I bought tickets from an online ticket site and with those tickets came a free subscription to Entertainment Weekly magazine.  So I read the magazine but then I have all of these magazines lying around now.  Lately, I’ve been working on decluttering and cleaning up and organizing my apartment… and life, I guess, so I decided to do a little craft project by looking up different things you could do with magazine pages. Pinterest to the rescue of course!

Here are some photos of my crafting attempts of these magazine paper flowers below.

The main flowers I kept seeing were these beautiful table flowers for Rock and Roll Bride.

So I didn’t have shredding scissors or floral tape but I had scissors so I figured I had enough to make these work.  The most recent Entertainment Weekly magazine I had featured Outlander on the cover – it was dated March 4th.   This particular magazine didn’t have a whole lot of pages with good color schemes but I found an ad for crackers that was mostly red, an add for the Real O’Neils that was green and a lovely black and white photo of Ryan Reynolds… oh Ryan Reynolds. 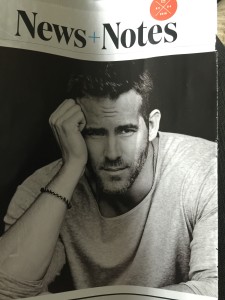 Oh super adorable Ryan Reynolds.   So the steps, basically you fold the paper up and then cut it.  I don’t know if maybe Vogue pages are a lot bigger than Entertainment Weekly because the flowers in the pictures look so much fuller than mine do. 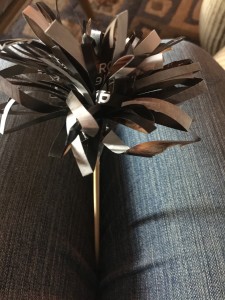 First picture are the folds, then the cuts (which might take a few more cuts but work fine with regular scissors) and then the final product.  I didn’t take any photos wrapping the paper around the skewer – but I tried wrapping them three different ways to see if I could get a fuller look and it just wasn’t working. 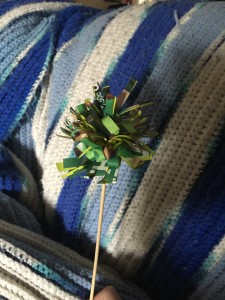 Here is the green one I did. This was actually the first one I did – the Ryan Reynolds one was second and then the red one was third.

Here is the completed “bouquet”: 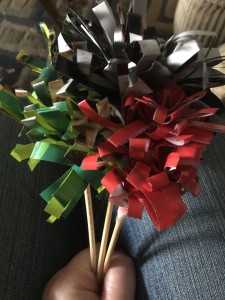 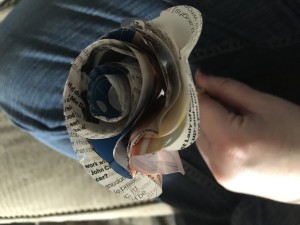 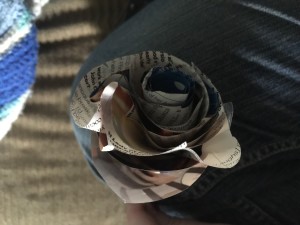 The other thing I found were the paper roses. I have no link to any decent instructions because most of them weren’t very good. I didn’t even take pictures trying to do it because magazine paper seems to only work well for this if it’s thick and sturdy.  The basics of it are that you cut a square page into a spiral and then roll the spiral around so that it turns into a “rose”:

It doesn’t look terrible but  I ended up doing two spirals and combining them to – again – try to make the flower look fuller.  So I guess – all in all – a thin magazine and small pages may not be the best for these flowers, but I put them all in a vase and I have a little paper bouquet sitting on my faux mantle. 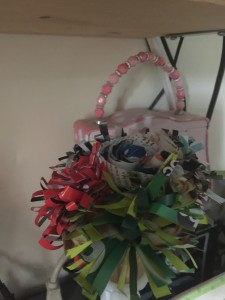 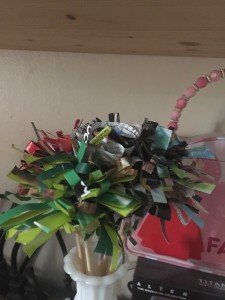 And there you have some craftastic craft attempts!