I loved the idea of the Horror Block because I love mystery boxes and I love horror, it seemed like the perfect collaboration.  However, I only purchased a handful of horror blocks (3 I think, plus a “Welcome Block”) and none of them left me thrilled. One of them, which was the first block I received, was the “Halloween” block that came in October.  Only, it contained a mask I was never going to use, a shirt that looked homemade and that I would probably never wear and a few other things that I cannot even recall because they meant that much to me.  I also did not have the available funds to be able to get these boxes every month and since they did not thrill me, I opted to only purchase one when I had some spare money to spend frivolously.

Fast forward to now. I’m working a seasonal job that offered me some extra cash so I figured what the heck!  Nerd Block was promoting their Summer Blowout Sale for an, I believe discounted, Horror Block.  The block was going to contain items that had been in blocks throughout the year, so if you were a regular subscriber, you were bound to receive duplicate items.  Since I believe I only received maybe one block this year, if even, I decided to bite.  This is BY FAR the BEST Horror Block that I have EVER received!!! Oh, I also purchased the $4.99 special (or maybe it was $14.99? ha) shirt block… also killer!

Originally, I wrote up the review about a week ago and I’m just late to posting it… Sorry! Psh.  Not really, though.

I received the shirt block on Monday or Tuesday this week (more like two weeks ago), I forget when exactly.  It was more a shirt bag than a block and I opened it up to discover a pretty cool Black and White “Weird” Al Yankovic T-shirt with some pink graffiti that says “Tacky”.  I dig Weird Al, so I was happy with it.  As a matter of fact I wore it today (which was whatever day I actually wrote this up)  so here you go: 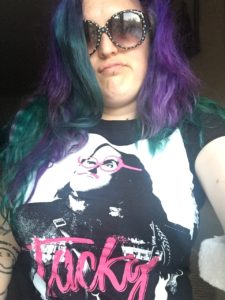 I finally received the Horror Block today (again…whatever day that was!)  and held my breath while I opened it – would I be as disappointed as I have been in the past!? 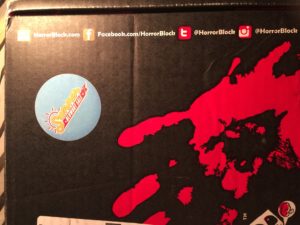 At first glance, I was kind of stoked.  I could tell that I got something Freddy Krueger in there and everyone should know he is the man of my dreams – not my nightmares. 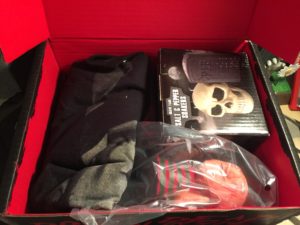 The first thing I pulled out was a Zombie Backscratcher.   This is cute and quite useful.  I just got a bear claw back scratcher that I use all the time but an extra backscratcher can’t hurt! 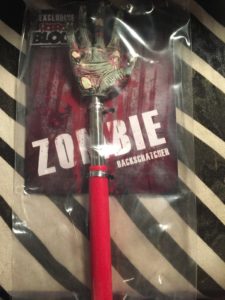 It is slightly more cute than useful as the Zombie’s nails are not quite long enough and the hand seems to be plastic so if you have a faint scratch that you need to itch, it will certainly do the trick.  My Bear Claw back scratcher that I got somewhere on a road trip in California is metal, so the claw works really good at getting that itch that you just can’t reach without having to apply a lot of pressure.  No hate to the Zombie scratcher – It’s super cool and I’m sure I’ll use it. 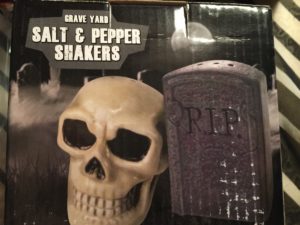 For one, I’m impressed that they seem to be made of a good quality material – ceramic or something.  It doesn’t say but I’m going to guess ceramic.  Skull and a Gravestone.  They’re already sitting on my kitchen table – empty – but still!  This is more than most of the Horror Block items I’ve received in the past made it.  Most of them are shoved in a box in my closet somewhere, I’m sure.  Heck, I might have gotten rid of some – I’m sorry Horror Block.

So then I pulled out the item I knew was Freddy Krueger!  It’s a cute little stuffed doll!  I LOVE IT!  I seem to have accumulated a few Freddy Krueger dolls and this will definitely be making its way to that collection! Seriously… Love it. 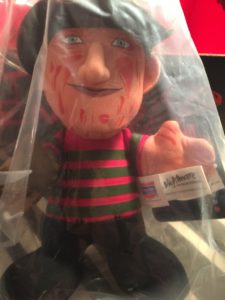 Then I saw a big black thing and I was like what… What is this… a Book!?  Bitten, by Kelley Armstrong.  I assumed based on the bloody cover and title that it is a Vampire book. However, when I turned it over and read the back I saw that it was actually a Werewolf story!  I’m sort of over the whole Vampire thing. The number of Vampire movies I haven’t seen would probably astound you.  I’m intrigued, I admit, and I love books so I’ll definitely give it a try. 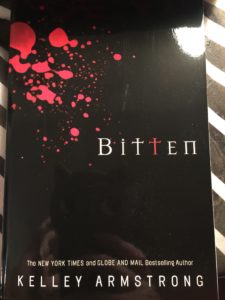 I’m a little weirded out by the description on the back being so … all about sexiness because I don’t know… is it like a Werewolf sex book?  Weird.  Again, I’ll give it a whirl for sure! (Side note: I took a picture of the back of the book but it’s blurry and I’m far too lazy to find the book and take another!)

I thought that was it… besides the shirt… but as I’m pulling the coupons and what not out of the bottom I discovered a Cthulhu patch! 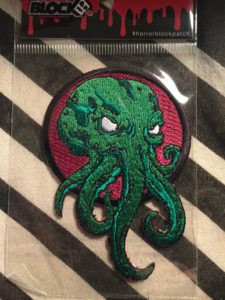 It’s super cool looking albeit Christmas colors!  However, I’ve been looking for a patch to cover up the radio station on my old Radio station jacket.  I worked for a radio station, we got these super awesome jackets that have our name on one side and the station on the other.  Sometimes, I think about covering up the station… or maybe my name… I don’t need any creeps being all “Hey Rachel! what’s up?”   Maybe that is where I will use… or maybe, I don’t know.  We will see!  I really like it though and it deserves to go somewhere!

Finally, the shirt! Bela Lugosi – You can never go wrong. 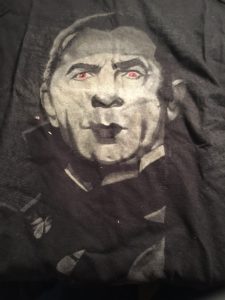 So – a Mystery horror block that contained things I like and things I will actually use!  This is a first Horror Block!  I’d like to say I’ll get a regular subscription but I’m not made of money, but maybe if the theme is right (or I got free boxes to review or someone treats me to a box or something) I’ll give it another shot and hope I get another cool box of useful/cool horror themed items for the Horror loving girl in me. 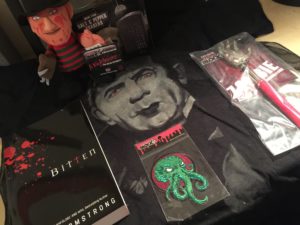 Speaking of Horror… I have to go get started on my Drawlloween drawing and eat. It’s been nice to write a review again and a blog of sorts.  It’s been a while.  I wish my computer were faster… I might do it more often.  Ha ha ha. (Man this was a while ago – life knocked the Drawlloween wind out of me a while ago!)