The October Loot Crate was Horror and claimed to have something Nightmare on Elm Street related and I had some extra money so I figured I would bite. I have never purchased a loot crate before but obviously, I know that it is a mystery box with fun goodies in it.  I think similar to getting a horror themed mystery box, I am not “horror” enough since I do not love all things – In Loot Crate, it seemed really similar.  I enjoyed the crate well enough, but as with usual things I don’t have the money to be able to get one every month but I am glad I picked up the October box.

I received the Loot Crate on a night that I was sort of busy/sort of sick and I honestly let it sit for a few days while I was half dead. 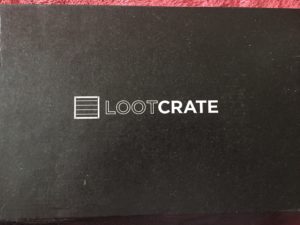 Hi, Loot Crate!  I’m sorry I took so long to open you up! 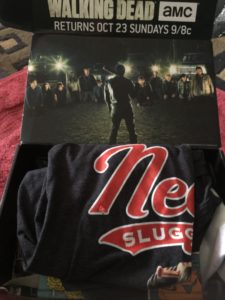 Here is what it looked like when I opened it up.  It was interesting because I knew the moment I opened it up that I was SOL.  I do not watch The Walking Dead, I know I’m horrible.  So when I realized there was some Walking Dead theme to it, I knew there was a few things I was bound not to be into it or understand. 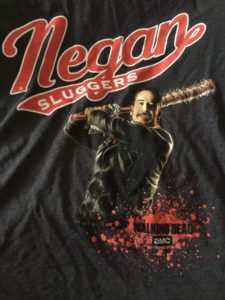 I have absolutely no idea to what this is in reference but because I have seen the word Negan in reference to The Walking Dead so… I guess I have a Walking Dead shirt. At first I thought, Oh I’ll just give it to my brother or my dad who like the show but then I realized that it’s a girls tshirt and it barely fits me.  So I guess I’ll just keep it for myself for now.  Eventually, maybe I’ll watch the show!  It’s a cool shirt, I guess. I mean without having any idea of the reference really. 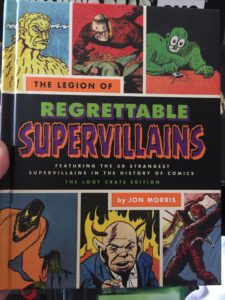 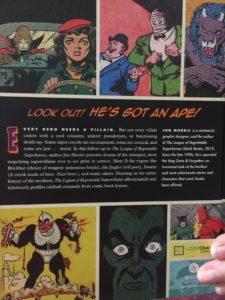 Next up was the regrettable super villain book.  Pretty cool and interesting little book, I dig it.  I don’t know that I have a lot of other things to say about it other than I dig it. 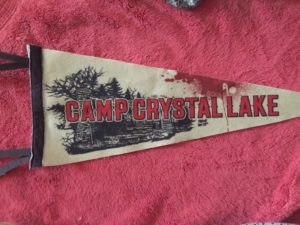 Camp Crystal Lake Flag Banner thing.  When I was cleaning out boxes earlier this year I was really sad that I didn’t find my old flags that I had from Book Club at the Library and things, I know I had them.  I’m not the hugest Jason fan in the world but it’s a cool decoration.  Hung it up on my wall already. 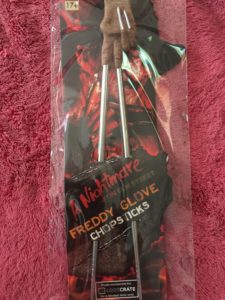 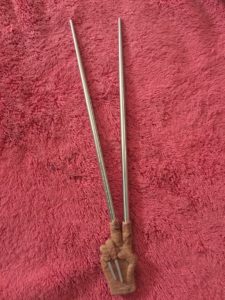 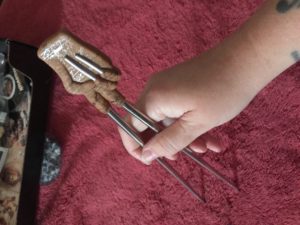 Freddy Krueger Chop Sticks.  Now, I can’t eat with chopsticks… as in I’ve never figured out the art of eating with chopsticks… but these are super cool.  They’re shaped like TV Antennaes – which I really hope is on purpose  They’re stuck together in Freddy’s glove.  I imagine that may make using them easier.  I have not tried to use them yet, to be 100% honest. 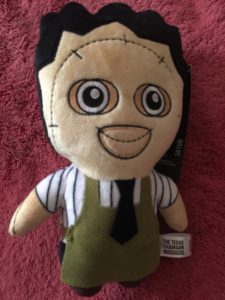 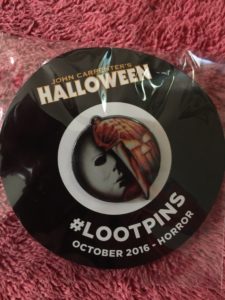 I never researched Loot Crate Enough – I wasn’t aware there are collectible pins.  Pins are always super cool to have so I’m not sad to have a Halloween pin!

Finally another thing I did not realize about Loot Crate is that each of the boxes are designed to be something cool. This one had a walking dead zombie mask to use for Halloween or just to scare the pants off your neighbor. I ended up being kind of sick so I didn’t end up doing a whole lot with mine but maybe another time! 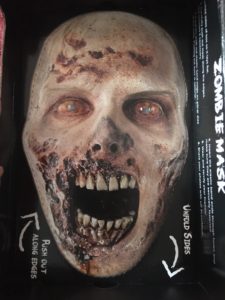 Finally there is a cool little book that tells you some interesting details and other fun stuff associated with the box.